“Kube Rigging is a professional team that gets the job done on time and on budget. I can rely on Darren [Flindall] to quickly work out rigging solutions to sets I design” A. Debska, Production Designer

Darren Flindall, founding director of Kube Rigging, is an Advanced Rigger and BECTU member regularly working as HOD rigger on film productions to create safe and cost-effective rigging solutions. It is not only Darren’s experience and ability to look at drawings and work out what equipment is needed that makes him so reliable, but also his ability to work well with others and build a strong, efficient team of riggers. 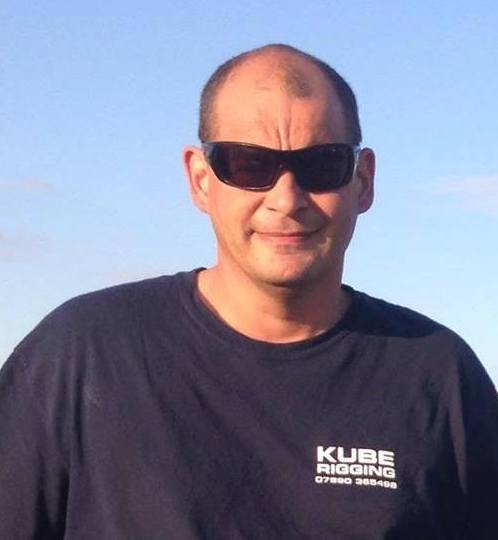 Most recently Darren was HOD rigger on Disney production CRUELLA due to be released in 2021.  Prior to that he worked on the TV series DEVS.

His rigging experience in film and TV began back in the 90s on productions including ‘Interview with a Vampire’, ‘Mission: Impossible’, ‘The World is Not Enough’, ‘Die another Day‘ as well as working as a rigger on location abroad in Morocco and France on films such as ‘Sahara‘ and ‘Double Down‘. Other films that Darren has worked on include ‘28 Weeks Later’, ‘Kick-Ass‘, ‘Prince of Persia‘, ‘St Trinian’s II: The Legend of Fritton’s Gold’, ‘London has Fallen’, ‘World’s End’, ‘Inception‘, ‘The Iron Lady’, ‘Quartet’, ‘Great Expectations’, ‘RUSH‘, ‘Paddington Bear’, ‘The Imitation Game‘, ‘The Kingsman’, ‘Genius‘, ‘Annihilation’, Paddington 2, Overlord, Cruella,  …and many more.

aspects of the business strengthening and developing business with construction, riggers, producers, gaffers, art directors and all involved in the production process.